The day after Christmas most people get to lounge around like pythons digesting elephants.

But my friend Andy had a tourist on his hands. A tourist who, despite poo-pooing the idea of a visit to Disneyland (this was before I knew Andy helped design some of the rides) still wanted to see the Hollywood sign, Rodeo Drive, and other cheesy Los Angelean tourist attractions.

So, on Boxing Day, Andy took us to Rick’s Tacos in Pasadena (the sign says Bobby’s these days, but everyone knows it’s still really Rick’s), to fuel up for the serious sightseeing mission ahead.

Coca Cola. Best by the bucket.

Then we navigated onto the Parkway – once a mellow, winding road through genteel suburbia, now a crazy, narrow sidewinder that trucks shouldn’t dare to drive. 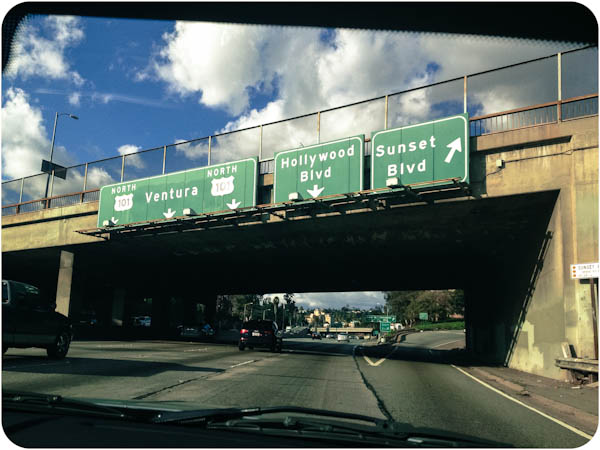 The signs read like an amalgam of Tom Petty songs.

Thanks to caffeine, sugar, the Chevy Crossfire and Andy’s superior navigation skills, we were soon strolling along the pavement of Hollywood Boulevard, occasionally pausing to peruse the names on the stars we were stomping on.

Chaka Khan! The musical hero of many single women.

Perhaps as a reaction to the really rather seedy surroundings – Hollywood Boulevard is a bit like Sea Point Main Road in the bad old days – a form of reverse snobbery overcame me, and I refused to pay any attention to the ‘famous’ names. Instead, I decided it was time a few unknowns had a brief (and all too obscure) revival on this blog.

Creator of Gilligan’s Island and The Brady Bunch, neither of which I have ever seen, Sherwood also wore an impressive pair of glasses. He was supposed to be a biologist but started writing jokes for Bob Hope for the money. As biologists do. 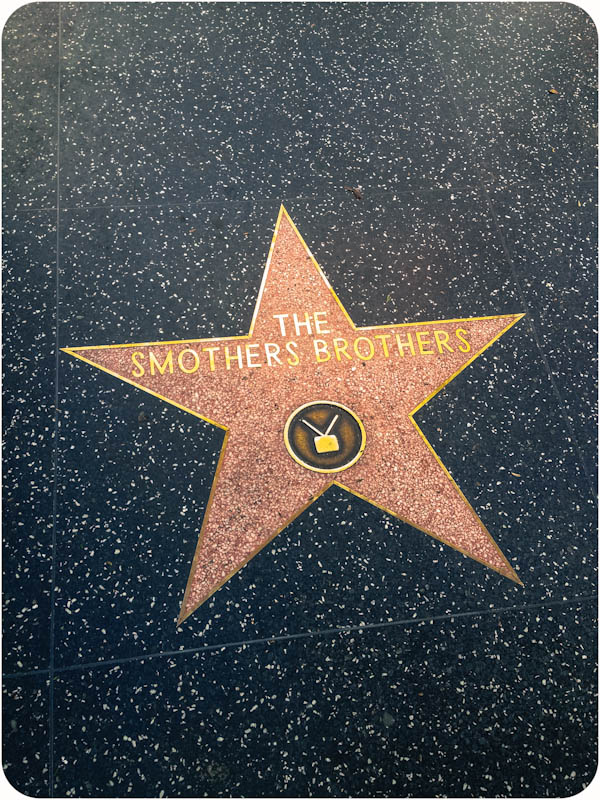 Tom and Dick Smothers (such a pity they didn’t have another brother) sang folk songs on a comedy TV show – and somehow managed to turn this into something politically controversial.

Cesar Julio Romero, in fact. With that name, he probably had no choice but to go into cinema. When he wasn’t flexing his moustaches as a Latin lover, he was acting in historical costume dramas or playing The Joker in the Batman TV series in the 60s.

Just after I ignored Robert de Niro, I saw a name that made me stop in my tracks and gasp. Could it be? Was it really her?

Goosebumps, right? But seriously, apart from her 12-year run in Murder, She Wrote, Angela Lansbury was in an impressive number of movies and other TV shows (including an appearance as Jessica Fletcher in Magnum P.I – must find that episode). She was nominated for an academy award three times but never won. However, she has won as many Tony Awards (whatever those are) as any other actress. She has also written a fitness book.

Not long afterwards, Andy stumbled upon (but not over) another of my childhood heroes… 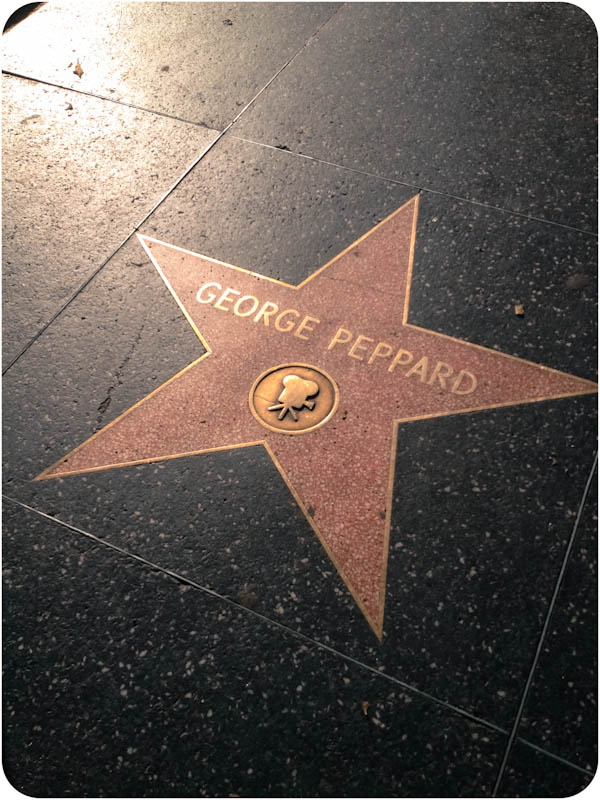 Did you know that Hannibal was also in the Marines in real life?

Excited now that I’d found the stars of two of my favourite 80s TV shows, I started paying more attention to the pavement. Perhaps I might even glimpse Richard Dean Anderson or Tom Selleck (who, incidentally, made me think moustaches were extremely sexy, right up until I was 16 years old). Instead, I found a properly famous celebrity I thought I should photograph, just to be polite. 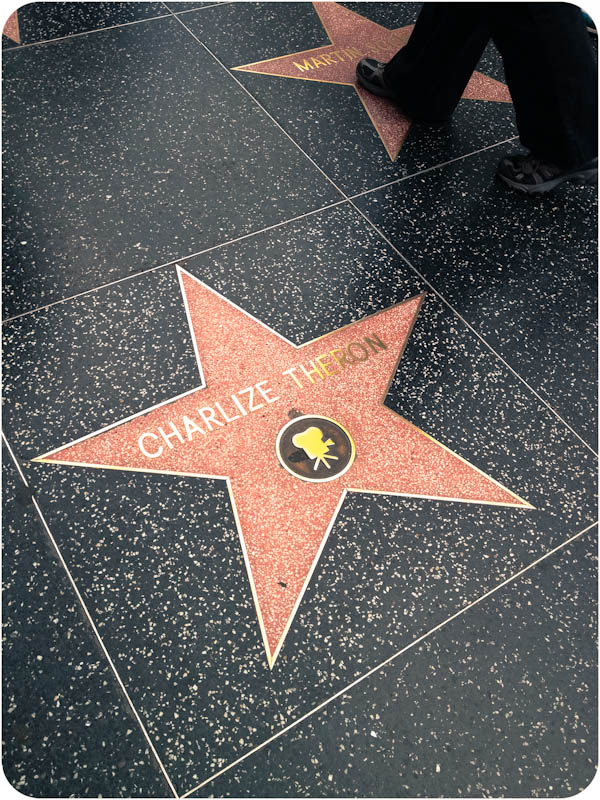 You may be happy to know that she’s right next to Martin Scorsese and not far from Tom Cruise, in a very good neighbourhood of the walk of fame.

There were several excellent celebrity impersonators along the strip, including Darth Vader (my alter-ego) and Michael Jackson (convincing except for his lack of a bubble room) who would have allowed me to be photographed with them, for a fee. But the celebrities I eventually chose to have my photo taken with didn’t charge anything…

Did you know that Patty Andrews is still alive and living in California?

Then it was time to go in search of the Hollywood sign. Hollywood-Hillers get highly annoyed by tourists in search of the sign who park in their very narrow, winding roads and take stupid photos of one another. So, they do everything possible to discourage them, putting up lots of misleading signs saying ‘No access to sign’ at every junction. But Andy found a cunning way to an excellent viewpoint using an obscure website that published illicit directions.

Sure enough, a highly-annoyed Hollywood-Hiller-with-dog passed by and pointed pointedly at the big sign saying ‘No Stopping’ that we and another carful of high-heeled Koreans had stopped in front of and were gaily taking photographs next to. I smiled and shrugged. Honestly, what did he expect? If Hollywood knew anything about entertainment, they’d have sorted out a proper viewpoint yonks ago. 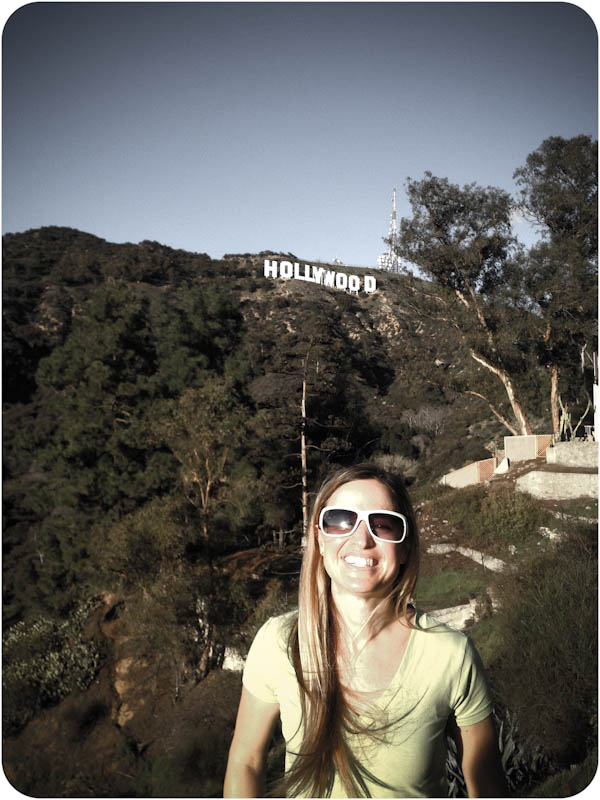 Me, annoying people who live in Hollywood. You can tell how sad this made me.