It is a truth universally ignored that the further you travel to see something, the more impressive it needs to be to feel like the effort was worth it.

So, after Meg and I spent 18 hours on a bus to get from Buenos Aires to Puerto Iguazu (all bus rides in Argentina last 18 hours or longer), the resulting requirement was for Iguazu Falls to be like Vic Falls on steroids, with armies of armadillos escorting us across rainbow-covered clouds surrounded by toucans singing Disney ballads.

Puerto Iguazu was hot. The sort of hot that makes leaving any air-conditioned environment an exercise in squintily trying to keep your balance and carry on walking, instead of falling down in a heat-induced coma. After eating lunch in an air-conditioned snack bar, and then eating ice-cream in the air-conditioned heladeria next door, we found an air-conditioned hostel with a swimming pool about 10 metres from the bus station, and hid there for the rest of Day 1.

On Day 2, we struggled out of bed and got onto an air-conditioned bus to the Argentinian side of the falls. Then we got out of the bus and the heat hit us with full-frontal humidity.  Our willpower flew off with the toucans and our energy went galloping off with the armadillo army, leaving us to stagger limply around looking for shade and coolth. Waterfalls were a secondary goal.

As it happens, we were escorted on our way by armies of cute little animals, but they weren’t armadillos. Coatis look like a cross between lemurs, aardvarks and mongeese. They are also known as Brazilian aardvarks, hog-nosed coons, crackoons and snookum bears (snookum bears!). But they are in fact members of the racoon family. Like racoons, they loooove garbage and, while looking adorable, are capable of inflicting nasty scratches if annoyed.

Coatis. Not aardvarks, and not as cute as they look.

The other thing about Iguazu, at least on the Argentinian side, is that it involves a lot of walking, even though there is also a train to help you get to the very far away bits. So, long before we reached any waterfalls, I needed a snack. A word of advice: when you read travel guides telling you to bring your own food and drinks because they’re expensive inside the park, believe them. The price of empanadas and Coke Zero (by now our staple diet) was prohibitive and I was forced to struggle on through the jungle with just one measly mince empanada in my grumbing stomach.

Was Iguazu impressive enough to make up for that bus ride and that heat? Luckily for everyone concerned, it was. However, it wasn’t quiiiite impressive enough to lure us out, as originally planned, for a second day of waterfall viewing from the Brazilian side. You see, that swimming pool at our backpackers turned out to be a great deal more magnificent… 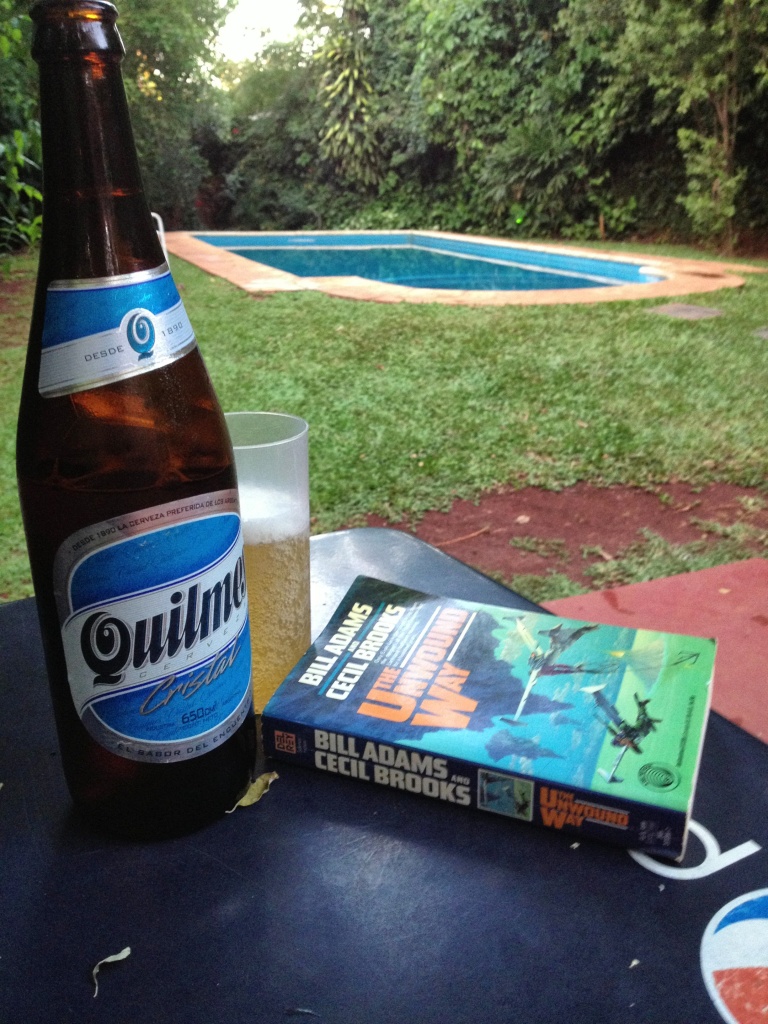 This is what Iguazu looks like. As you can see, it is mostly just a lot of water falling off rocks. And rainbows. And coatis. There was also a bird, but it wasn’t a toucan. I hope these photographs will save you the hassle of going there yourself.

One thought on “Staring down the Devil’s Throat at Iguazu”