My friend Andy had many important errands to run in San Francisco, so I was hugely grateful when a very kind friend of his offered to spend an afternoon showing me anything I cared to see of the city. Naturally I picked The Golden Gate Bridge.

As a savvy San Fransican, Kelly knows the best way to enjoy The Golden Gate: cycle along the city’s waterfront, across the bridge, and down the swooping hills of Marin County, birthplace of mountain biking*. Sunny and cool, this would have been the ideal day for such an outing, except for the fact that both of us were in the grip of Colds From Hell.

This is the best way to check out The Golden Gate Bridge.

So, instead Kelly drove us across to the Marin side of the bridge and we walked halfway back across it, giving me the chance to take many more photographs of the world’s most-photographed bridge*.

I admired the paint – a colour now known as Golden Gate* – which has to be refreshed constantly. Once the people who maintain the bridge have finished painting it they simply start all over again from the other side*.

Let’s take a moment to appreciate the fine work of the men and women who spend their lives painting this bridge.

We also admired the the views of the city; Alcatraz; three rocks next to the bridge, which I christened the Three Bears as Kelly wasn’t sure what their real names were; and the hills of Marin county.

The Three Bears can be seen paddling on the left.

I was struck by the anti-suicide signs and dedicated public hotlines placed at regular intervals along the walkway. The signs read as follows: “There is hope. Make the call. The consequences of jumping from this bridge are fatal and tragic.”

A sad reminder that not everyone on the bridge is always as happy to be there as I was.

However, looking at the drop, I wasn’t convinced that jumping would be 100% effective**. I also thought the signs might actually encourage jumpers, since fatal, tragic consequences are presumably what they’re aiming for. I thought it might be more off-putting to have signs reading: “The consequences of jumping from this bridge are ugly and painful. You will bellyflop really badly and break every bone in your body.”

For a while there were volunteers patrolling the bridge talking to anyone who looked a little too interested in the view directly beneath. This lowered the suicide rate dramatically*. However, this cheap, human, and sensible project has apparently been scrapped in favour of spending lots of money encasing the entire bridge in wire mesh. I’m glad to have seen it before it gets turned into a big, red chicken coop.

After absorbing the views from the bridge, Kelly drove us around the Marin Headlands for several viewpoints of the bridge.

We also got to meet Santa on his Harley at one of the viewpoints.

Then, feeling that we had accomplished quite enough for one afternoon, we drove to San Francisco’s closest neighbour, the seaside town of Sausalito, and ate the best pizza I’ve ever tasted at this restaurant on the water’s edge. Pelicans paddled around sailboats in the harbour as the setting sun painted the whole of San Francisco gold. Despite The Cold From Hell, I was very happy to be alive.

I would go back to San Francisco just to eat this pizza again. 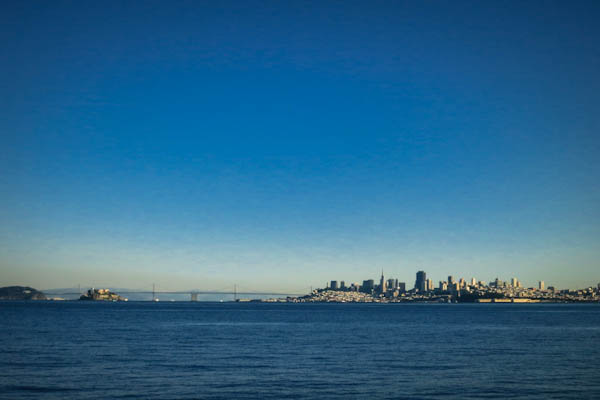 A golden evening in San Francisco.

*Although I am technically a trained journalist, I want to absolve my alma mater from any responsibility for my sloppy and unverified reporting, which is based on repeating stuff that people tell me and occasionally skimming Wikipedia***.

** Incidentally, I was wrong about how effective jumping off The Golden Gate is. With a drop of 67 metres from the road to the water, it’s seen more suicides than any other bridge in the world.

** I was a bit confused about why it’s called the Golden Gate Bridge when it’s obviously red. However, Wikipedia helped me avoid actually asking such a stupid question. The name of the bridge comes not from its colour but from the name of the channel it spans, which connects San Francisco Bay to the Pacific Ocean.

One thought on “Walking the Golden Gate”