I didn’t go to the End of the World (as Ushuaia is called by tourist-brochure-writers) because I was more interested in catching a ferry.

The Navimag Ferry, which plies the Chilean Fjords between Puerto Natales and Puerto Montt, is not a typical tourist cruise. It’s a working cargo ferry that has a few cabins for passengers, and much more room allocated to cows, cars, trucks and other unglamourous goods. However, the scenery it passes through is spectacular and it’s a special way to see a part of Chile that’s otherwise extremely remote and inaccessible.

The Navimag Ferry Evangelistas in Puerto Natales, waiting for me!

The ship’s business end. It was interesting being out at sea and catching a strong whiff of cow every so often.

Because it leaves only once a week (on Mondays travelling north from Puerto Natales, and on Fridays going back down south from Puerto Montt), I had to catch a bus straight from El Calafate to Puerto Natales, passing fields of dead cows (freaky!), lengthy Chilean border controls (requiring immediate consumption of my banana, as fresh produce from Argentina is viewed on about the same level as illegal narcotics), and a 10-block walk with all my luggage through a freezing downpour (oh the joy of arriving in a new country without any local currency to catch a taxi).

I spent a pleasant day in Puerto Natales, a sleepy, historical port whose main claim to fame is as the gateway to Torres Del Paine National Park. This was another Massive Tourist Must that I was forced to ignore – although not entirely reluctantly. Despite the offputting name, Torres del Paine (Towers of Paine) is an extremely popular hiking destination. However, the hikes are hardcore and the weather is apparently as moody as a manic depressive who refuses to take their medication.

The famous W-Circuit is also seriously pricey for a hike. Beds in the mountain Refugios cost between USD42 and 149 a night – and that’s for the cheapest bed in each Refugio. Add linen and food, and you’re looking at USD98 to 196 a person a night for a basic dorm (cough! splutter!). This seems to be a problem with the tourism boom in Argentina and Chile: Facilities are fine, but prices can be prohibitive, even for Europeans.

I joined the zombie hordes of tourists shuffling around the local Unimart supermarket trying to find braaaains… I mean food. In their cases, dried noodles for hiking meals. In mine, peanuts, biscuits and bottles of wine to smuggle on board the ferry. (My research had suggested that snacks would be necessary to supplement the slightly bland food.)

Then I went down to the Navimag offices to check in. I asked the nice man if he could give me a nice bed, preferably not too close to the loos. Since the ferry was far out of my price range, I’d booked the cheapest possible ticket: a USD380 passage in a C-class dormitory. The beds aren’t in actual cabins – they’re simply tucked into the corridors of the ship. Obviously being near the loos would mean lots of sleep-disturbing toilet traffic. The nice man gave me a nice smile and promised that he had given me a very nice bed.

I took my boarding pass and went off to saunter around town and photograph quaint old buildings until it was 9pm and time to board the boat. At boarding time, the passengers assembled in the hotel’s conference room. We walked the couple of 100 metres to the dock and onto the ferry via the enormous loading bay. 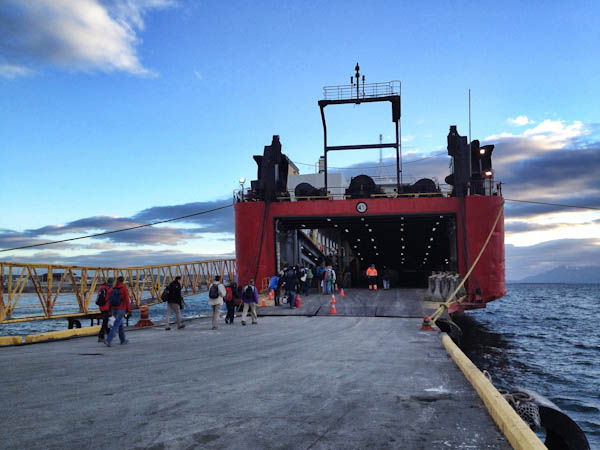 Boarding the Navimag Ferry Evangelistas through the loading bay.

When I located my berth, I had a lovely surprise. The nice man had upgraded me from C class to BB: a proper cabin – with a window! – and only one cabin companion: a delightful Austrian lady named Andrea, who works in the travel industry in Peru. I mentally upgraded the nice man to the Wonderful Man. 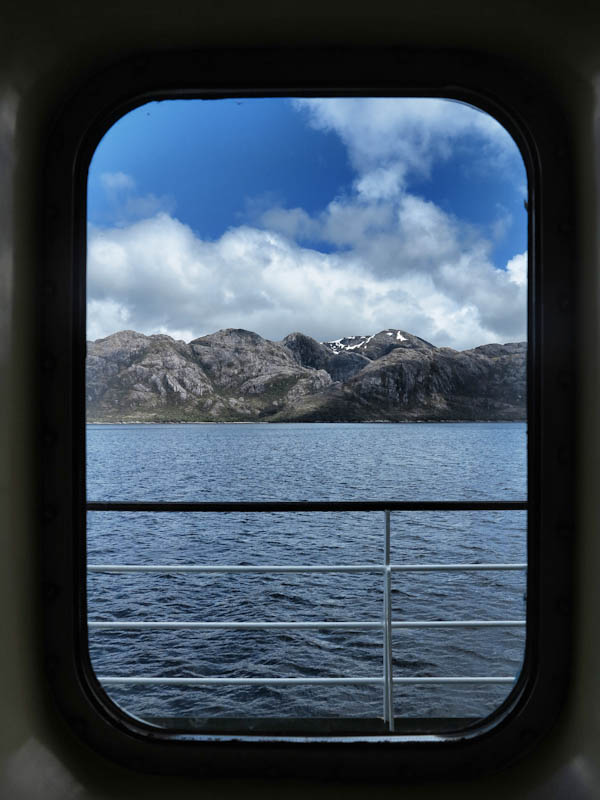 View from my cabin window on the Navimag Ferry a couple of days later.

I celebrated my good fortune that evening with a couple of Pisco Sours (my first ever) in the bar, before realising that I’d best stick to my smuggled booze in future: the tiny drinks were about R50 each.

On board the Navimag in Puerto Natales, ready to sail at 4am next morning.

Next morning, we were woken up at 5.30 by our MC on the intercom so that we could watch the captain navigate some ridiculously narrow Narrows. All of us crammed onto the top deck, gasping frequently because of the cold, the proximity of large chunks of tree-covered rock and the beauty of our surroundings.

Crowded onto the bow of the Navimag Ferry. The next morning’s 5.30 wake up call for the second set of narrows didn’t get quite the same response (about 10 of us bothered to get up).

In what would become an unchanging ritual for the next three days, we were then called to breakfast, then to lunch and then to supper. Not much else happened, apart from the scenery sliding by, the mid-morning nature talk (in which our MC usually managed to say something nasty about penguins, which he hates) and the evening nature film (which I didn’t bother watching as there were sunsets to watch outside instead).

The dining room on Navimag Ferry Evangelistas in a rare moment of calm and emptiness (i.e. right at the start of the voyage, before any meal time.) 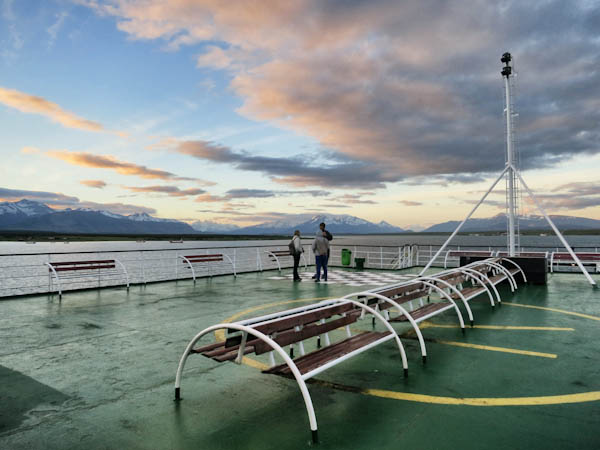 Sunset on the upper deck of Navimag Ferry Evangelistas

Occasionally, someone would spot sea-life: some dolphins, sea lions or (memorably) a pair of young orcas (which I missed). My personal highlight was watching dolphins jumping into the sunset as rays of golden light streamed down onto them out of an apricot cloud. Oh yeah, and then then there was that rainbow over that glacier. Sigh… 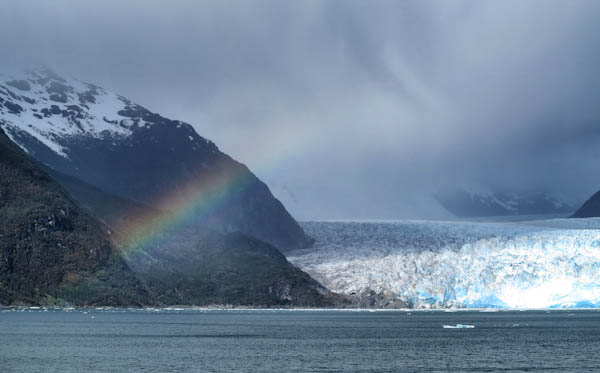 Rainbow over a glacier. No kidding.

Despite these great excitements, it was an uneventful voyage. Even the famously turbulent Golfo de Penas was the calmest it had been in years and only a couple of colourful splashes had to be mopped up by the amused staff. The weather, famously uncooperative, remained perfect, only occasionally lapsing into mist and drizzle when it remembered to.

Perfect weather on the Navimag Ferry

I took little strolls on deck and little naps in my cabin, while waiting for meals to be called, so I could shuffle along in a queue to collect my tray of food, before sitting in the occasional patch of sunshine pretending to read a book. On the last evening, I actually got excited about the goodbye bingo game. At that point, I decided it was probably a good thing that the cruise was coming to an end: any longer and I might start getting the urge to wear tartan trousers and putty-coloured plastic shoes. 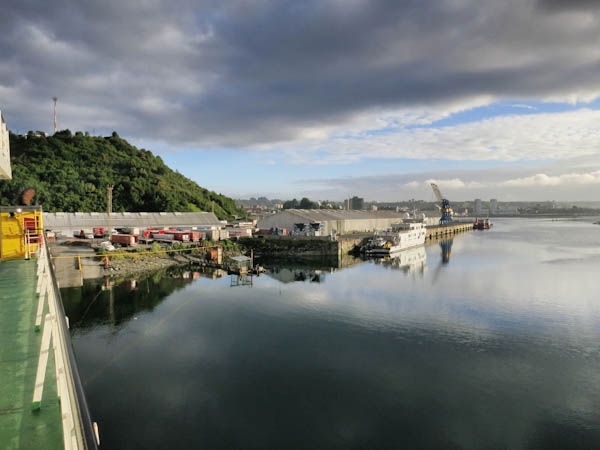 Early morning in Puerto Montt on the Navimag Ferry, just before we disembarked.

Still, it’s not often a 36-year-old gets the chance to feel perfectly on a par with a pensioner. And, in closing, I thought I’d just say something to all the 80-year-olds out there:

You guys are onto something.

Early morning on deck on the Navimag Ferry

(P.S. The other thing I did was take lots of photographs. Check out my Navimag photo album and you’ll see why.)