While Cape Town was getting ready to host Lady Gaga, I was going gaga over something else entirely: my first proper look at a Really Big Glacier. This time, I didn’t muck about with some half-assed hike to see a not-particularly-enormous glacier from half a kilometre away. Instead, I got onto a bus and spent 30 hours driving to Perito Moreno, arguably one of Argentina’s grandest and most accessible glaciers, so that I could get within decent gawping distance of it.

Once I’d arrived in El Calafate, the small town that has been polished to a high tourist sheen by its proximity to Los Glaciares National Park, I caught another bus to the park, and then I caught a boat. And then the bus again. So it was a pretty involved affair. But even I had to admit it was worth it in the end. 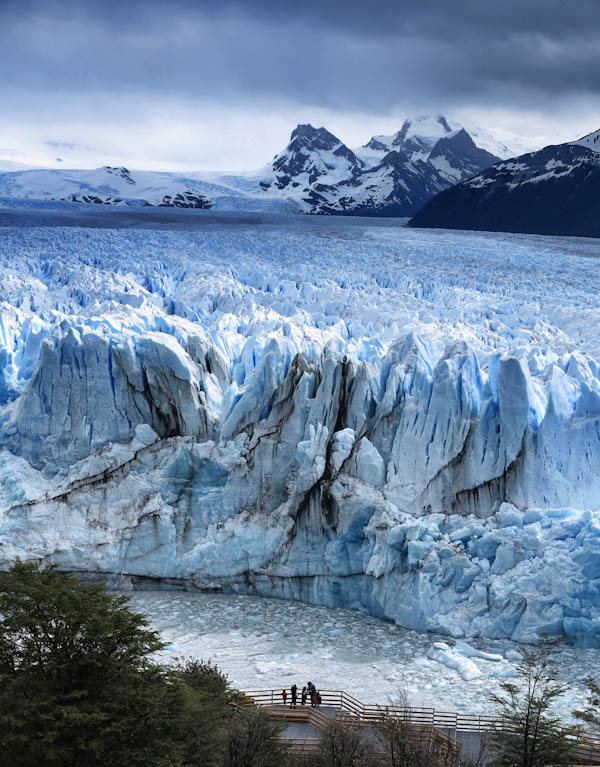 At A$90 (about R180) the boat trip is a good idea, as you get to see the side of the glacier that isn’t visible from the land-based viewpoints, and you also get just that bit closer to the ice cliffs (whoop). However, it’s not absolutely necessary, as the extensive network of walkways on the peninsula opposite the glacier offers a variety of views that are more than enough to keep the avid glacier gawper amused for the 4 or 5 hours the bus trip allows you there. 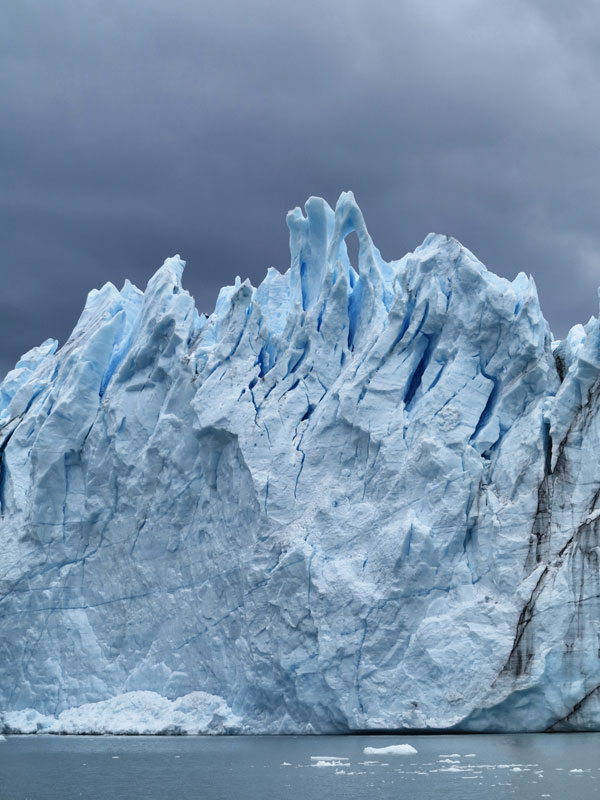 Awesome ice-sculpture-style thing seen from the boat. Unfortunately, there wasn’t a person I could position at the base of the cliff to give a sense of scale, but this thing is about 60 metres (200 foot) high.

What makes it all particularly exciting is that, like the glaciers on El Tronador, this one is constantly on the move, and bits of it frequently fall off.  The ‘bits’ can be anything from little pieces the size of a coffee table, which create misleadingly impressive booming, thundering noises, to chunks the height and size of seven-story buildings, which set up a rumbling like the world’s ending.

When the second kind of bits come crashing down, everyone starts rushing around, pointing and grinning and trying really hard to get a photo or a video, even though it usually happens much too fast for that and you’d have to have been videoing the spot before it started, which would be quite a bit of luck. In the three hours I spent on the walkways, three of these demolition-style crashes occurred. I missed the first, but happened to be standing directly in front of the second when it happened. Naturally, I had turned my camera off for a moment. Even though two separate seven-story chunks came off, apparently in slow motion, this is all I caught of it:

Notice the ice-schrapnel that flies off and riddles the water like a Gatling gun. That’s why you’re not allowed close to the edge of glaciers.

By the way, don’t bother watching the video all the way to the end. Nothing more happens. I was just hoping it would. Rather check out the links to the much better videos of the same thing. And to see lots of obsessively photographed angles of huge chunks of blue ice, you can have a look at my Perito Moreno Glacier Photo Gallery.

6 thoughts on “Going Gaga over Glaciers at Perito Moreno”