If you thought my cycle ride around Circuito Chico was disgustingly cool (and I hope you did), I’m afraid this was even better. As in, this much better: 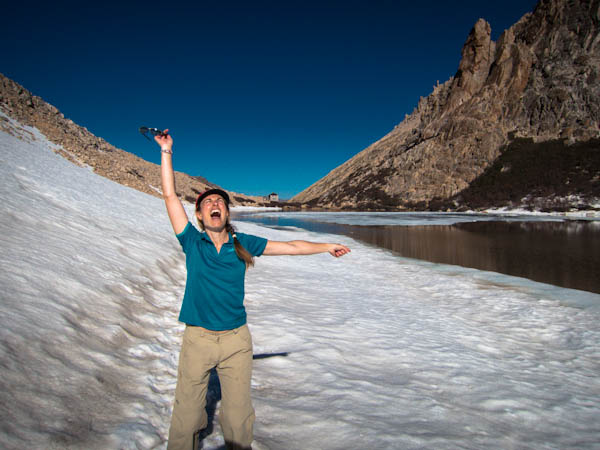 Here’s how I got up to Refugio Frey…

A few days ago, I dragged Thomas and another Spanish student around most of the town looking for Bariloche’s indoor climbing gym. (They don’t climb, but somehow I persuaded them a climbing gym hunt was a great way to spend an afternoon.) We found it, and the next day I went back with Thomas and my climbing shoes.

While I was pretending to be able to teach Thomas how to boulder, one of the owners of the climbing gym arrived and we started chatting about climbing in Bariloche, lessons for Thomas and guided climbing trips for me. After about 15 minutes, Iñaki had invited us to his birthday party – because that’s how people are here. Totally awesome.

The best part about Iñaki’s birthday party was that it was on Saturday night at Refugio Frey – one of the mountain-top huts Walter had told me I should visit.

So, I woke up with the southern lapwings on Saturday morning, hefted my backpack and met Thomas in town for some pre-expedition shopping. At the supermarket it became clear that neither of us had had enough coffee that morning. After wandering around the aisles in confusion, we ended up with a small assortment of snacks, a bottle of Fernet, some Coca-Cola and two large, raw steaks for that night’s supper.

Then we went and repacked Thomas’s bag. He’d cunningly brought one without any space for the food, and I’m not woman’s lib enough to carry three litres of cola and a bottle of Fernet up a mountain by myself. Once the groceries had been unfairly distributed (mostly in Thomas’s bag) we bought a 1/4 litre of helado and waited for the bus to Catedral.

Catedral, ‘South America’s best ski resort’ according to all the signs on the way there, is something of a ghost town in summer. The enormous parking lot held only a handful of cars and most of the shops and restaurants were closed. But the bus driver kindly pointed us at a large sign saying ‘Frey’, where we posed with the buddy so thoughtfully provided for any hikers who happen to be walking alone. 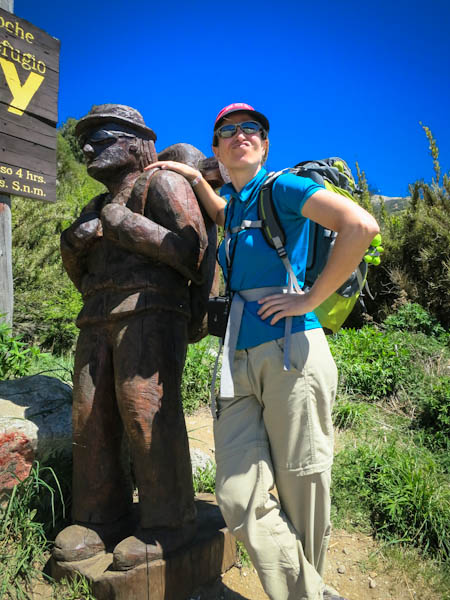 The walk started out relatively level (even going downhill in places) and I began to wonder if we were going up a mountain at all. I horrified Thomas by deciding that the numerous streams we crossed were perfectly safe to drink from. A couple of hours later, when I hadn’t yet keeled over and died, Thomas followed suit.

Eventually, we heard the rushing sound of a river and entered the shade of a large indigenous forest. The path started to go up and up, as did the length of my photographic interludes as I dallied over each moss-draped tree and limpid cascade.

At last we broke through the tree line and feasted our eyes on the still-snowy mountains. As we rounded a corner, I was struck by a magnificent cornet atop the ridge.

This turned out to be just one of the many rock climbing crags of Cerro Catedral (as far as I can tell from this rock-climbing guide, it is Frey crag, or Aguja Frey). Unfortunately for me, the routes are all trad climbing (or free climbing), and I’m merely a sport climber, so I had to content myself with gaping in wonder at the fairytale turrets reflected in the frozen stillness of Lago Toncek.

However, even though I’d carried my climbing gear up to 1,700 metres for nothing, I had nothing to complain about. Four different birthday parties were in full swing, with a large group of drummers, singers and dancers providing entertainment, while off-duty rock-climbers wound down with a bit of slack-lining. 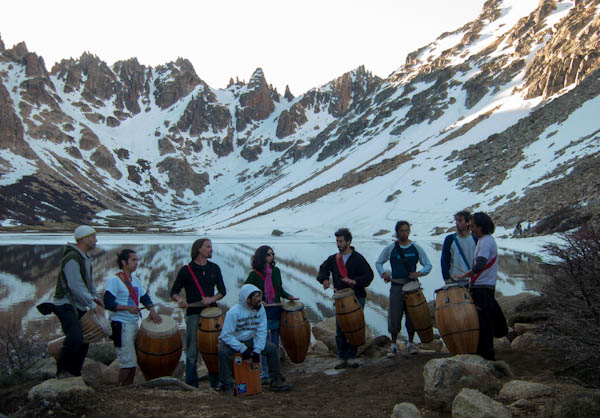 After soaking up the vibe for a few blissful minutes, I dragged Thomas around the lake for a spot of sightseeing and photographic dementia. On the way, I took great care not to get my shoes wet. I even resorted to walking barefoot through the icy streams and in the snow (okay, I didn’t resort to it, I did it for fun). But, just before we completed our circuit, I took a careless step straight through the snow and fell feet first into the icy lake.

So, I squelched back to the Refugio, dug out my flops and dry socks and we broke out the Fernet and Cola. A jug was found for us. Snow was heaped into it and an indiscriminate amount of Fernet (which tastes very similar to Jägermeister, and is just as strong) was mixed with an unknown quantity of Coca-Cola. Since there was no sign of anywhere to braai (sorry, asado) our steaks, Thomas and I settled for a packet of crisps for dinner washed down with three big jugs of Fernet and Coke. 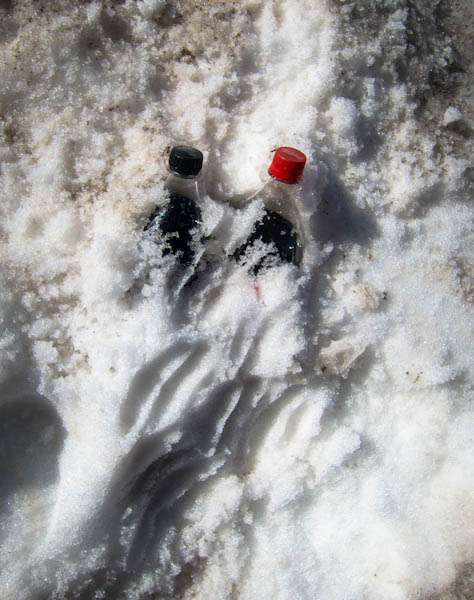 I was having a simply marvellous time, dancing to the drumming, chatting to friendly climbers in my Spanglish and sitting soaking up the songs and the sunset until, suddenly, a message went from my stomach to my brain that the amount of alcohol and sugar I’d consumed was not commensurate with my weight, altitude and state of nourishment. And that was the ignominious end of the party for me, I’m afraid. But it was fantastic fun while it lasted! (As I am writing this, Walter has offered me a glass of Fernet. To my disbelief, I’ve accepted. Have I no brain at all?)

Since I was the first to pass out, it was fitting that I was also the first up next morning. Amazingly, there was still a little bit of Fernet left in the bottle. Suppressing a shudder, I downed some yoghurt instead and concentrated on not tripping over all the bodies lying strewn around in sleeping bags.

Since we hadn’t thought to bring lunch, and had never got around to eating our dinner, we started the long, shaky trek back down to Villa Catedral on empty stomachs and without further ado. But not before I’d taken a long last look around and vowed to come back with some cams, nuts and free climbing skills. And possibly also a drum.

One thought on “Refugio Frey: A hiking, climbing heaven”