I am sure you are eager to know what further feats of idiocy I have managed to perform since we last met, so I won’t keep you in suspense.

I’m sorry to say that in the last 24 hours, I have done nothing more stupid than to get off a bus only 15 blocks after the correct stop. (Also, I forgot to weigh my vegetables at the grocery store and caused a delay at the till, but I do that at home too.)

So, there will be no sniggering at me in this blog post. But, if you want to know more about Buenos Aires, read on, for at last I have had the chance to do some proper exploring.

On Ignacio’s advice (and with his help), I caught the 118 bus to Palermo. Ignacio chose the 118 for me because all I had to remember was to get off it five blocks after it turned left – instructions even I could surely manage to follow.

Here is a photo of a fine specimen of the Buenos Aires bus driver in his decorative natural habitat: 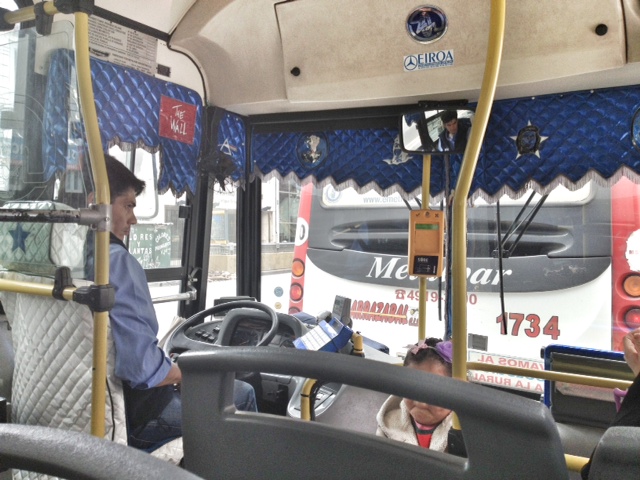 The buses in Buenos Aires are otherwise perfectly normal, but all the drivers pimp their rides like this. I can’t figure out how the slightly Twin Peaks dwarf woman got into the shot.

The point of my visit to Palermo, possibly the wealthiest, poshest part of Buenos Aires, was to visit the Museo de Arte Latinoamericano de Buenos Aires, or MALBA.

This is a typical pavement in Palermo.

This is a typical garage door in Palermo.

Since I naturally neglected to bring a map, I developed a highly cunning (and soon to be trademarked) technique of ensuring I could find my way back to the correct bus stop: Each time I turned a corner, I took a photo of the scene behind me. Thus, my iPhone was soon full of photographic masterpieces like this one: 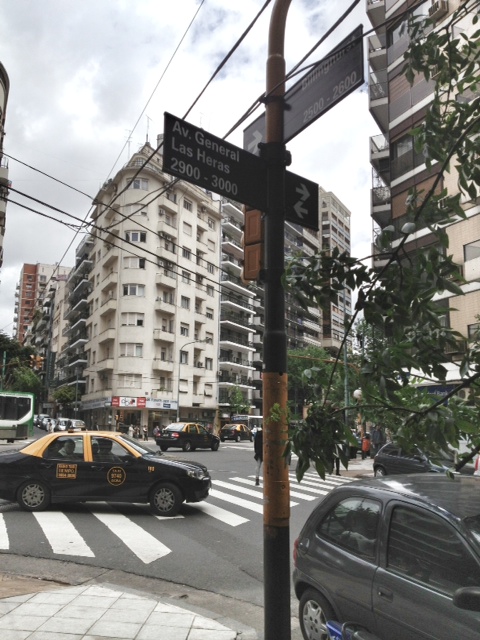 Apparently there was an iPhonography exhibition/competition in my neighbourhood in Cape Town last night. It is a great pity I wasn’t there to enter this shot… Note the characteristic Buenos Aires taxi, the kind Marcelo The Taxi Novio drives.

Using another patented Westwood travel technique, technically known as Following My Nose, or FMN, I located MALBA. Shortly afterwards, I also located the sign that informs visitors that MALBA is closed on Tuesdays. Which, of course, was the day I had chosen to visit.

Continuing to abide by strict FMN principles, I made a tour of a small park and a shopping mall instead.

In the park I found this: 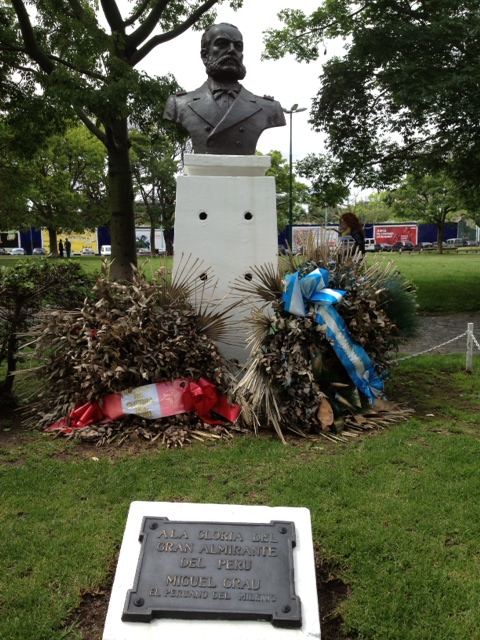 This park was all about Peru for some reason, and Miguel Grau was a very important Peruvian. As I discovered during the course of the day, Argentinians are nuts about monuments and statues and only require the slightest excuse to erect one. 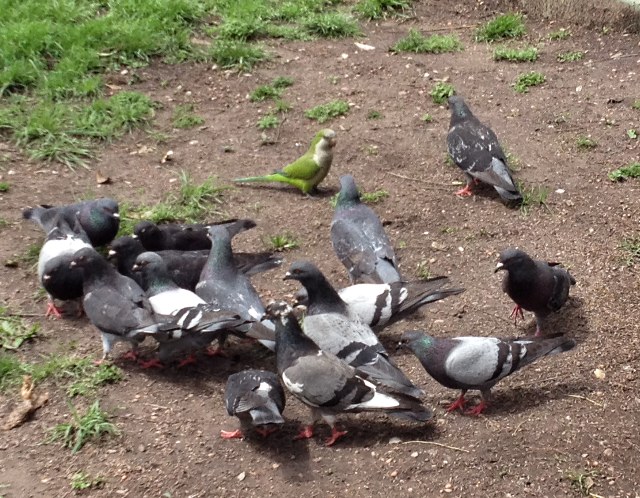 A parrot amongst the pigeons. My first obviously South American tick. I confused some locals by asking what kind of parrot it was. They told me simply that it was a parrot and a pest.

In the shopping mall, I tried to draw money from the parking pay station (it looked like an ATM and was covered in credit card logos, so it wasn’t quite as stupid as it sounds) and then sat and admired the amazing view of train tracks and a narrow silver sliver of the Rio de la Plata from the rooftop:

It’s there – just behind the trees. See it? Seeing the actual river is apparently quite an accomplishment. Although the Rio de la Plata is huge, there aren’t many places you can get to it from in Buenos Aires.

The free wifi at the shopping mall allowed me to discover that I was only a block away from the Japanese Gardens. So I went to visit those: 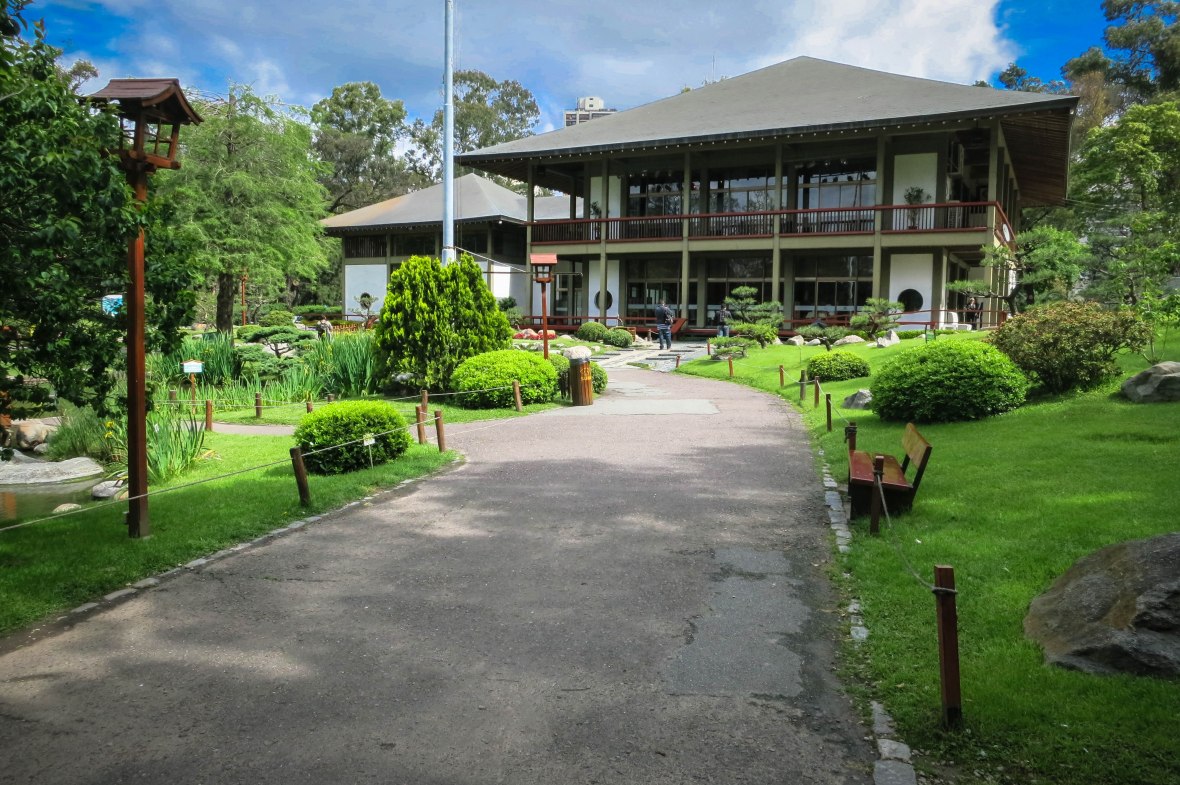 As I was about to return to my bus stop, I looked further down the road and saw this:

When I reached the traffic circle, I couldn’t help but notice that there was another garden I could visit. And this one was free.

El Rosedal apparently has 18,000 rose bushes. All of them beautiful and fragrant in the sunshine. Sigh… 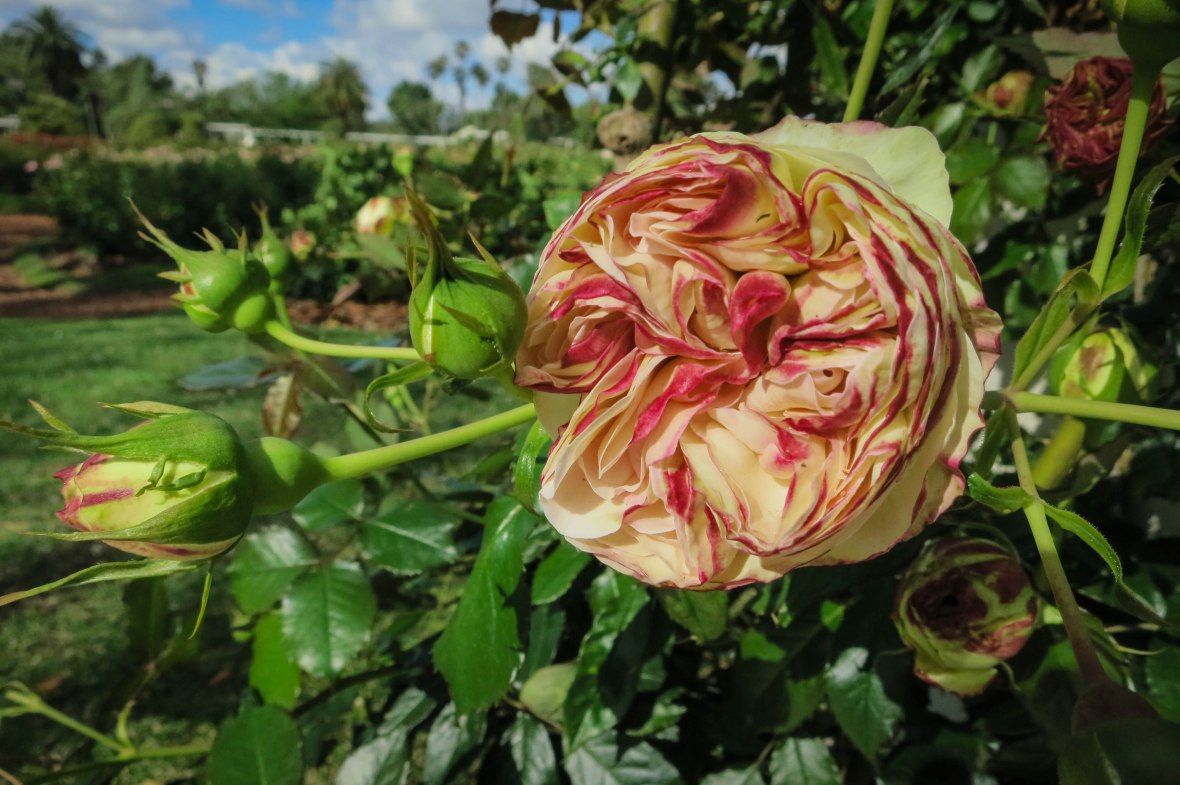 El Rosedal also has about 18,000 monuments to various poets. Here, Dante looks peeved while a couple relax by the canal.

I saw this lovely building and approached with interest. Could it be a little museum, gallery or gift shop? Nope. Just the loos.

At last I turned around and headed for home, just in time to catch rush hour and enjoy the authentic experience of playing sardines on the bus.

Apparently Volta also sells some of the best ice-cream in Buenos Aires. Out of my never-failing sense of duty to you, I will try some very soon.

4 thoughts on “A Grand Day Out in Buenos Aires”