Ngorongoro Conservation Area is of one Africa’s most spectacular tourist destinations. A walking safari through its highlands will take you to boundless plains, fairytale lakes and terrifying peaks. By Alison Westwood. 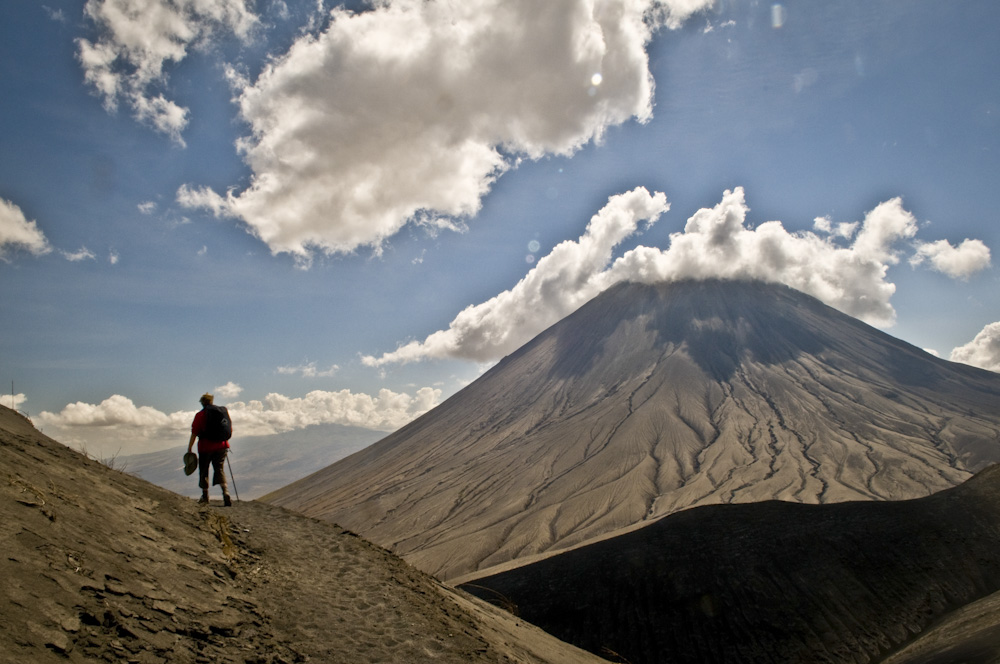 Click on the image to view a gallery of photographs from this adventure.

My delight turned to dread as dawn broke and we could see where we were. A full moon had clothed the volcano’s slopes in glamour, but sunrise slid across an immense landscape to expose us as specks clinging to a monster’s furrowed hide.

Gullies yawned on either side. Stones dislodged by our boots tumbled and bounced, gaining momentum as they disappeared. A twisted branch stuck out of the ash like a dead hand waving for help. Swollen pinnacles of lava loomed above. My footsteps faltered; my smile shrivelled. I sat down, suddenly.

We’d started climbing Oldoinyo Lengai, the Masai’s Mountain of God, at midnight. Eight of us with three guides picked out a path with headlamps and trekking poles. We plodded along, pacing ourselves for a 1,600 metre gain in altitude, our march slowed further by slippery ash and a 40 degree incline.

The plan was to summit at dawn, but our guides were no longer familiar with the route since massive eruptions – the last only days previously – had obliterated paths, landmarks and vegetation. As the sun peeped over the horizon, we were well behind schedule. Three of the group of eight turned back, exhausted.

Fellow walkers Marc Reading and John Berry chivvied me up and we clambered on, ducking rocks sent flying by another climber and hauling each other over near-vertical sections. Denise and Jean-Paul Lechanteur, the group’s grey-haired comedians and veteran adventurers, were some distance behind as we picked our way along a vertiginous ridge and crawled to the crater’s rim.

I lay on my stomach and peered in. Precisely the colour and texture of an elephant’s skin, the crater appeared to have no floor. It was a perfect cone, sucking what should have been the summit down to invisible depths. I thought of gravity wells, wormholes and an Old Testament Hell. ‘I want to get out of here,’ I thought. Without looking back, I started slithering down the Mountain of God on my backside.

This huge caldera is sometimes described as a zoo because it’s so easy to see the animals, most of which don’t (or can’t) ever leave. Sure enough, we watched lions spooking zebra, cheetahs lounging under trees, big tuskers striding solemnly through Lerai forest, hippos rolling in mud like massive grey rotisserie chickens, a thousand crowned cranes on the plains and black kites dive-bombing tourists for their sandwiches at Ngoitokitok picnic site.

Our camp was right on the crater’s edge, so we could stare at the magical moonlit cauldron while we sat around a fire sipping hot chocolate. Despite this, I was happy to move on. Nainokanoka, just outside another smaller crater called Olmoti, heralded the start of our walking safari: a four-day journey through the Ngorongoro Highlands to Lake Natron, which would (eruptions permitting) culminate in a climb up Oldoinyo Lengai, the volcano the Masai call the Mountain of God.

Smoke still drifted from the ashes of our campfire as we set off, leaving tents pitched and piles of luggage on the grass. The crew would whisk away the camp to have it ready and waiting when we arrived at our next destination 18 kilometres away. Our only duty was to walk. And walk. And walk.

Leading us up a long hill was our Masai guide, clad in traditional shukas (blankets), army boots and, apparently immune to the heat, a thick woollen blazer.  At the crest, he paused dramatically to allow us to take in the view. Even after Ngorongoro, Olmoti Crater drew several appreciative gasps – and one or two wheezes. The altitude at the rim is more than 3,000 metres.

As we climbed out again, a tinkling stream of Masai cattle flowed in from the other side, coming to drink from the water that collects inside the crater and cascades through its broken lip as a 100-metre waterfall. After the Serengeti National Park was created, 1,000 Masai were relocated to the Ngorongoro Conservation Area (NCA) with all their cattle, sheep and goats. Today, more than 40,000 Masai live inside the NCA, their herds mingling with wildlife, their huts tracing fairy rings on the hillsides.

We passed several villages as we started across the Embulbul Depression. In the rainy season, this is a vast expanse of muddy emerald grass, but now the savannah was brown and dusty, sewn with thousands of tiny mole skulls. It stretched before us like a giant treadmill, and no matter how long we walked, nothing seemed to come any closer.

At last we reached Bulati, where our tents glowed purple in the setting sun and a Masai donkey train kicked up luminous dust. Worn out by the day’s walk, we collapsed onto camping stools, complaining of aching legs. Then Mark proposed a remedy.

Children gathered, keeping a cautious distance from the crazy foreigners. Sheep looked askance. The crew pretended not to notice while the eight of us lay supine on the grass, knees propped high on stools, ankles in the air, staring at the sky. The Bulati Lapdancing Association was born.

The association’s members were relieved to discover that the first day’s walk was the longest, especially Natalie Tonking and Susan Mynhardt, who had been dubbed the blister sisters because of the trouble their new boots were giving them. The second stage was an easy 10 kilometres, with an unforgettable surprise at its end.

Our path led to a thick forest growing down a steep slope, where we stopped to peek through a gap in the trees.  Far below was an iridescent aquamarine lake, bordered with snowy soda and candyfloss flamingos. It sparkled with sunlight and pink dots of flying and floating birds. Clouds sent snaggled emerald shadows scudding over Lake Empakaai, which appeared to cover the entire crater floor.

It took almost an hour to descend the precipitous steps, pausing to marvel at (and swing from) giant Ficus natalensis trees with streaming aerial roots. Then we stepped out into the dazzling spectacle, tumultuous racket and almost overpowering reek of thousands of lesser flamingos. Empakaai, we were told, is the local word for ‘stinky’.

Eight adults immediately forgot blisters, thirst, sunburn and sweat and became children again, lost in wonder. While some drifted around in dazed enchantment, the photographers launched a series of flamingo-shooting forays involving equal measures of clumsy leopard crawling, frantic sign language and muttered swearing when our memory cards ran out. By the time we returned to the top, a thick mantle of mist had rolled over the crater, hiding its fabulous treasure from view.

The mist started to lift next morning, but we turned our faces away from the lake, towards a conical mountain visible on the skyline. Almost immediately, it too was obscured. The road from Empakaai to Nayobi contains a lifetime’s supply of powdery red dust. Each step sunk our boots in over the ankle and sent great puffs over our heads.

To make matters worse, all the Masai men from the villages in the area were working on the road. This seemed to involve marching up and down in large groups, kicking up as much dust as possible. All we would see of an approaching work party was a red cloud filled with flashing white teeth and spears sticking out of the top. Then it would engulf us.

We emerged an interesting shade of orange to find that Oldoinyo Lengai now dominated the landscape. Near Nayobi village, the volcano’s effects became frighteningly apparent. Eruptions starting in June 2007 had choked the land in grey ash, killing 1,000 cattle, countless wildlife and destroying crops. More than 10,000 people, mostly from Nayobi, were forced to flee their homes.

At Acacia Camp, only the fever trees had survived Lengai’s suffocating embrace. Our tents were pitched on a dessicated ridge with a view that resembled the end of the world. Water was scarce so, for the third day in a row, we each bathed in a small basin of water. No matter: Debbie Addison who, as one of Wild Frontiers’ directors, knew about such matters, assured us that the campsite at Lake Natron had running water, flush toilets, hot showers and – incredibly – a swimming pool.

The trail to Lake Natron was jaw-dropping. The last vestige of road petered out and died at Acacia Camp, so all our gear was loaded onto donkeys. We walked down the ashen slopes of the Great Rift Valley Ridge towards the wide soda lake, which lay 1,000 meters below, shimmering like heat haze on the horizon. Trudging up the other way were donkey trains loaded with salt blocks cut from the lakeshore. On the lower slopes of Oldoinyo Lengai, three 4x4s were waiting to take us to camp.

The water wasn’t running when we arrived (although the camp manager soon was), but after four days heavy on exertion and light on ablutions, I wasn’t prepared to wait. I found the swimming pool and, after a moment’s careful consideration, stepped into it fully clothed. Encouraged by the heat and the fact that the pool was next to the bar – which served cold beer in quarts – the others soon joined me.

The barman told us that the ascent of Lengai was open, so we could climb it that night if we chose. On the bar counter was a papier mache model of the volcano with a strongly worded notice warning prospective climbers of its difficulty. Obviously, this didn’t apply to veteran hikers like us. Celebrations in the swimming pool continued all afternoon until the beer ran out.

It was perhaps not the best preparation, but I was happy I’d carbo-loaded when John Berry and I paused a little way from the summit next morning and shakily took stock of our supplies. Gulping down vertigo, we shared a semi-liquid banana, one small ginger biscuit and a stale carrot sandwich I found squashed at the bottom of my pack.

From our vantage point, more than 2,000 metres above the camp, we gaped at a world that seemed somehow tilted over. The mountain slid away under us in a preposterous slant and the valley floor keeled over at a rakish angle. We could see right over the wall of the Rift Valley ridge and all the way to the Serengeti. From this height, we could even see the earth’s curvature. John and I both decided we liked it better when it was flat.