A 4×4 journey into the trackless wilderness of the Namib-Naukluft Park can be arduous and uncompromising. But long after you’ve washed its sand out of your socks, you’ll dream of going back to that desert. By Alison Westwood. 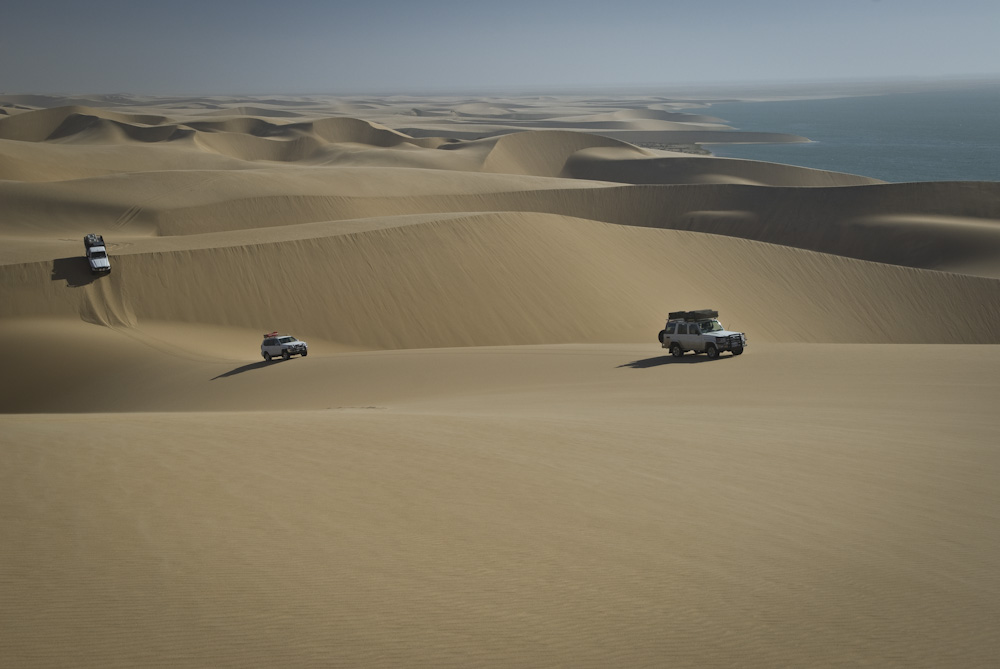 Click on the image to view a gallery of images from this journey.

I stood alone on the sand. Near my right foot was a sun-bleached skull, its sutures loosened by time. Vertebrae, ribs, tarsals and teeth: more than a dozen human skeletons lay dismantled by death and the desert. These people had once been Ovambo mine workers on ephemeral diamond fields in Namibia’s Sperrgebiet, the old Forbidden Zone. Their lonely graves had been blown open, their memories and names vanished with the dust in the wind. This is the way of the Namib, I thought.

The desert does not approve of roads. Sand sent fingers creeping across the tar as we drove out of Lüderitz. If it weren’t for bulldozers – we passed one standing off-duty on a verge – the fast-moving dunes would choke the road in a matter of days, Wittes told me. He seemed to find a certain satisfaction in the possibility. Wittes Beukes has no great esteem for roads either.

I was sharing the cab of a 4×4 with him on a six-day adventure from Lüderitz north to Walvis Bay through a restricted zone formerly known as Diamond Area No. 2. Now part of the Namib-Naukluft National Park, it’s still closed to all but a handful of specialist 4×4 tour operators, of which Coastways Tours is arguably the best and whose guide, Wittes, is perhaps the most colossal.

Two metres tall and built like a rugby prop (which he once was), Wittes described himself as a white gorilla and spoke a blend of German, Afrikaans and English in proportions which depended on his listeners. Our vehicle was  the White Lady, a Land Cruiser 4,5 litre EFI bakkie, named after a Namib spider that wanders long distances to find a mate. It was piled high with camping equipment, fuel, water and firewood.

Behind us were three other vehicles: a Land Cruiser station wagon (diesel) with two Italians and their guide; a Prado with a couple from Graaff-Reinet; and a second Land Cruiser bakkie with our chefs. It was an unusually small group for a trip like this, but the Italians were wealthy photographers who’d paid handsomely to keep it that way.

We turned off beleaguered tar onto a gravel track, which led across plains of blasted grey scrub, then petered out at the Koichab depression, a vast white pan over an underground reservoir of brackish water. On either side, iron-black inselbergs surfaced from the sand. Ahead rose rusty dunes sewn with straggly tufts of grass. ‘From now on,’ said Wittes – and this time there was no mistaking the satisfaction in his voice – ‘you are not going to see any tracks, except for the ones we are going to make.’

It was true. Although another group had passed through just the day before, the wind had done its work and nothing remained but, once or twice, faint lines in the sand. The only means of finding our way to the other side of this wilderness was a GPS receiver on the dashboard. The waypoints had curious names: Suzie, Bulldozer, Free Willy and Graveyard.

Wittes picked up his radio and relayed his Two Rules to the group: stay in his tracks at all times and leave no litter whatsoever. Then, between issuing warnings and instructions to the other drivers (‘Keep maar lekker aan die spoor, daar’s ‘n baby slipface aan die left’), he set out to convince me that the desert was full of life.

Namib soil, he told me, is really quite fertile and seeds of desert plants can last up to 36 years.  A clever form of biological risk-management means they need different amounts of rain to germinate, so the whole seed pool doesn’t sprout at once. The sand is hot enough to fry an egg (and your feet), so the shovel-nosed lizard keeps two feet in the air, alternating them constantly. Ludwig’s bastard (Wittes was interested to hear I called it a bustard) is better known as the geelnek pou, and locals used to eat them. They’re protected now, so there were plenty of the big birds rummaging through spiky grass.

A lone ostrich trotted away in the distance and several suicidal gemsbok tried to outpace our convoy. Wittes told me it was possible for the antelope to die of exhaustion from an imprudent run. Desert gemsbok don’t drink, but get all their moisture from plants. They were surprisingly numerous: we saw two herds of more than 20 individuals. ‘They can reuse their urine until it’s just a thick syrup,’ said Wittes.

At rest stops, we found fog-basking beetles, known as toktokkies because of the way they drum on the sand, and the spoor of the desert golden mole, which looked like the trail of a tapeworm to me. There were also pesky pairs of pied crows, screeching at us to drop something (‘Aasvogels van die woestyn,’ said Wittes: desert vultures). We didn’t see any chameleons, however, and the deficiency bothered Wittes. ‘There are some quiver trees,’ he said finally, although we hadn’t seen those either. ‘And they are alive.’

Into the dune sea

That first night in the desert arrived like a lingering and breathless caress. We were camped on a ridge of the Uri Haugab Mountains, where wind had carved granite into gargoyles. Wittes lit a fire as the light and heat drained out of the air and we sat with our feet in soft sand and cold beers in our hands. Jackals yipped in the dark. Later I got lost looking for the longdrop, so I looked at the stars instead. I couldn’t say which was bigger: the sky or the desert.

Next morning, I discovered why Wittes had crammed so much natural history into such a short time. The southern part of the Sperrgebiet is a biodiversity hotspot, but as we headed north, the Namib lost interest in life and put all its energy into provoking awe and – if you made the mistake of thinking about it – terror.

The transition was abrupt. We passed a bulldozer, abandoned years before by despondent diamond prospectors, and reached the first big dune. It took several attempts before all our vehicles scaled it and, on the other side, the grass was gone. Two carcasses signposted the way to the coast: a gemsbok skeleton, laid out neatly like a macabre Lego set, and a forlorn Ford stompneus truck named Suzie, broken down in the early 1960s and still awaiting a repair crew.

We paid no heed to their fate. In front of us was a magnificent playground, a roller coaster of dunes. Wittes described the different types: sikkleduine or barchans, lineareduine or seif dunes, sterreduine or star dunes, and (ominously) verdwynduine – disappearing dunes.

Thanks to fog that hangs over this coastline, slipfaces can be as steep as 42 degrees (the slipping point of dry sand is 37 degrees), as high as 60 metres and they appear out of nowhere. Unwary drivers may be caught by jakkals, sand traps formed by small humps on the slipface. The Namib sand sea is beautiful, but treacherous. ‘Many people make a mistake,’ said Wittes. ‘Weird things happens in the dunes.’

We thundered down the slipface of a bromduin (roaring dune) to eat a picnic lunch beside the breakers. Although it was well over 30ºC inland, no-one was keen for a swim in the sea. The frigid Atlantic acted as an overzealous air-conditioner and, as our route would hug the coast for the rest of the trip, we were more often chilly than hot.

Our journey developed a rhythm. Each morning, we’d wake to a gentle pink dawn. The Italians and I would trudge off with our tripods while the others drank moerkoffie around the coals of last night’s fire. By the time the sand turned yellow and the light grew harsh, the vehicles would be packed and no trace of our camp remained.

Although we usually covered less than 100 kilometres a day, most of our time was spent driving in the dunes. Sometimes we raced the tide along narrow beaches hemmed in by the sea on one side and impossible inclines on the other, our soft tyres thrumming thrillingly. We woke sleeping seals, set off volleys of clapping Cape cormorants and sent black-backed jackals scuttling over ridges. Now and then, Wittes would find a suitable slipface and I’d have to endure a Wall of Death, a manoeuvre in which the White Lady would briefly transform into a fighter jet.

There were plenty of stops. Some were to wait for the diesel Cruiser to huff and puff its way out of deep pits (you want petrol or turbo-diesel for these dunes, Wittes told me). Some were at notable landmarks, including a graveyard of whale bones, antique surf boats at Meob Bay, the ghost towns of Grillenburger, Charlottenfelder and Holsatia, and an Ovambo burial ground. Mostly we stopped to gaze at the scenery and its scale. Our vehicles looked like Dinky Toys in a Zen garden.

Each evening found us at another spectacular campsite. A cliff overlooking a fierce left break where Cape fur seals from a nearby colony surfed; a beach on a bay of sand rouged by millions of tiny garnets; a wide shore of mussel shells that had been under the sea less than 100 years before, as the wreck of the Eduard Bohlen, sailing slowly inland through the sand, mutely testified.

When the sun dropped, the wind rose. We’d huddle behind a windbreak stretched between the bakkies as sand gusted into our eyes, ears, noses and teeth. Once, we spent three hours sitting in our vehicles until the gale subsided. It always did, eventually. Then we’d gather round the campfire to snack on sosaties or sausages, and feast on steak or stew. I showed the group how to put coals in the sand under your chair to keep your bottom warm. Wittes showed me how to drink eine kleine – beer ‘mitt eine kleine tot of veesky’.

On our last night, we camped high above Sandwich Harbour, where pelicans and flamingoes flecked a shrinking freshwater coastal wetland. We were tucked between huge dunes that swirled like soft-serve ice-cream. Light kissed their tops as the wind rushed over, creating a luminous halo of dust. It was just half a day’s drive to Walvis Bay, tarred roads and lots of hot water, but I found myself wishing it were further. I went to the White Lady, turned the stereo up and sang along to a 1980s hit by Kansas that had been playing in my head since I stood with the skeletons.

‘Don’t hang on, nothing lasts forever but the earth and sky.

It slips away and all your money won’t another minute buy.

Dunes of the Namib

First published in the February 2009 issue of Getaway Magazine